Install the tensioning pulleys and the Fuji nuts, but don’t tighten them yet.

When putting tension on the belt, rotate the tensioning pulley counter clockwise and tighten (moving them toward the top of the cylinder head).

Use the meter to measure the frequency per the instructions. 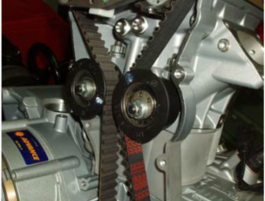 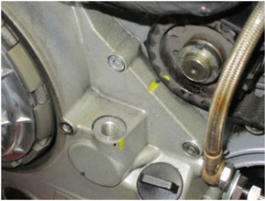 After the shims have been replaced (if required) install the camshafts. Apply oil or other lubricant to all mating (rotating) surfaces.

Align the marks on the intermediate shaft and the engine cover.

Use a punch and gently tap on the pulley to loosen the cam/cam retainers so the cam shafts can be removed. 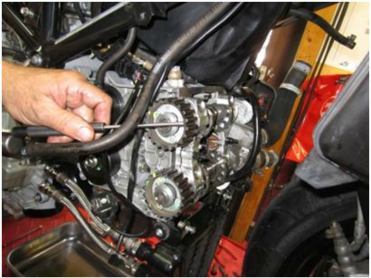 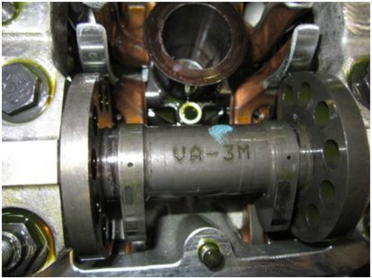 Here it the key to cam markings:

The markings (VA) indicate this is the vertical intake cam 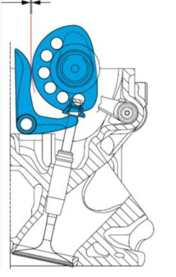 Use a feeler gauge to measure the clearance between the closing rocker arm shoe and the camshaft lobe, taking care not to compress the rocker arm return spring. Record this measurement in column F (closing shim measured clearance) for the valve being measured.

After the valve clearances have been measured for both cylinders, shim replacement (if necessary) is the next step. Determine which clearances are out of specification (A>B opening shim or F>G closing shim) and rotate the engine so the cylinder receiving shim replacement is at TDC. Proceed as follows.

Note: with the belts removed, either cylinder’s shims can be replaced and set back into the correct valve timing using the marks made on the pulleys.

Measure belt frequency and record (for reference): It isn’t unusual for belts that have been used for a few thousand miles to have a frequency reading of 80Hz (or less!)

Determine which cylinder to work on first and record the Ducati recommended valve clearance in column  B, opening clearance.

Spread out the feeler gauges in order.  This makes the progression much easier. The feeler gauges are “consumable” and don’t need to be returned.  Start with the desired valve clearance feeler gauge (i.e. -.15mm) and use larger/smaller gauges until the correct clearance can be determined 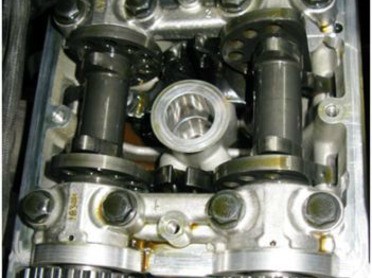 This is what you will see when the cover is removed. Confusing at first, but after a few minutes it all makes sense. No black magic or voodoo is involved, just beautifully machined surfaces designed for a purpose. Note the opening cam lobes (the smaller, inner cam lobes) are pointing “up” which indicates the valves are in the “rest” position and ready for measurement.

Move the piston of the cylinder being checked to TDC of the power stroke: in this condition all the valves are closed and the camshafts are in their rest position and pressure is relieved from the valve stem. Note the opening cam lobes are “up”, away from the cylinder when at TDC. 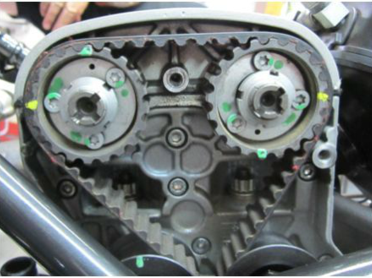 This procedure applies to all Testastretta engines. Ducati motorcycles are beautiful expressions of form and function. Adhering to the maintenance intervals is important to ensure optimum performance. There is an urban legend that Ducati valve adjustment is mysterious and difficult. This guide will dispel that myth and help you understand the ease with which valve clearance measurement and adjustment can be accomplished.

There are several methods for taking the measurements of the shims. In much of the written information and on the web forums the terms “Loaded” and “Unloaded” are frequently used. These terms evolved from working on 2-Valve and earlier Desmoquattro (4 Valve) valve trains where access was limited due to the cylinder head design.  These methods will give valid results for the Testastretta engines, but are not required.  Ducati has made measuring these clearances very easy. If this is your first time measuring and adjusting Ducati valves, take your time and enjoy working on your bike. Getting to the cylinder heads is the first step in the process.

Align the marks on the cams with the engine cases for the vertical and horizontal cylinders.

The vertical cylinder will require the small (included with the tool kit) cam holding tool to keep the intake cam in position while the belt is installed. 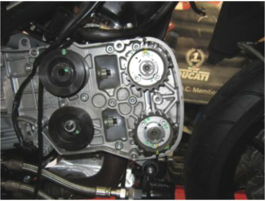 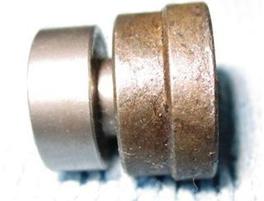 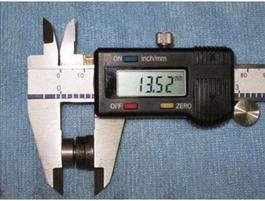 Slide the new shim onto the valve stem. 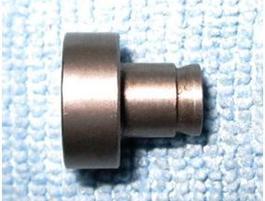 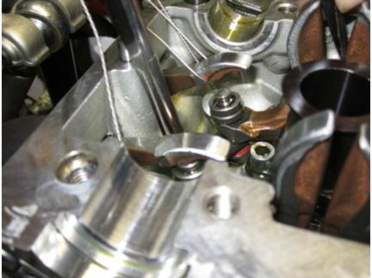 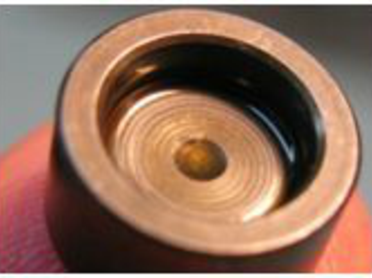 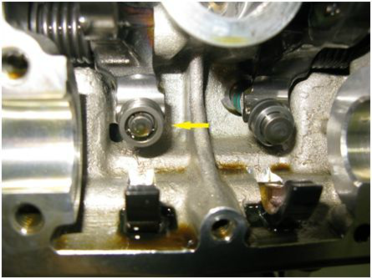 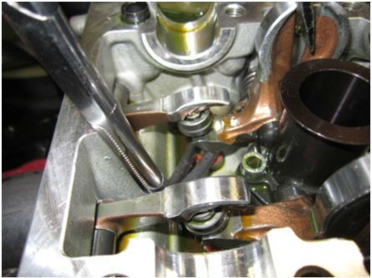 When removing the cam hold-down clamps loosen the inner and then the outer retaining nuts. These nuts are ½ the normal height and it is best to use a 6pt socket.

The vertical cylinder intake cam pulley will rotate (CCW) when the belt is removed.  This is normal and will be addressed upon reassembly.

Each cam is marked to its location. 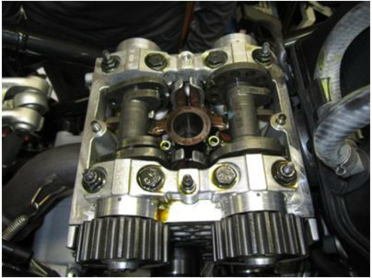 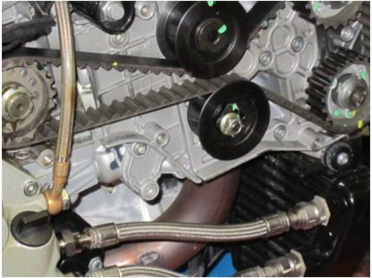 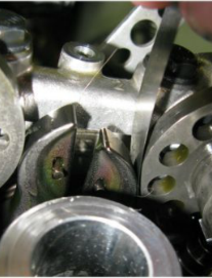 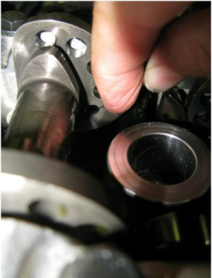 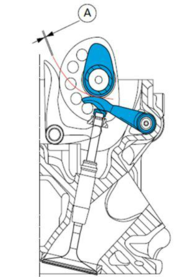 Use a feeler gauge (A), to measure the clearance between the opening rocker arm and the lower edge of the camshaft lobe:   Use progressively larger/smaller feeler gauges until the size of the clearance can be determined. The proper feel is if the resistance on the feeler gauge is similar to inserting the gauge into a large book. Once the clearance is determined, record this as measurement “A” on the worksheet.

If measurement “A” is outside the specification (or is not the specification you want) subtract B from A (smaller from larger) and record this number in column C for the opening shim just measured.   The result (C) will be used later to determine the new shim size.

Measure and record the opening shim clearances for the remaining valves on the cylinder being worked. 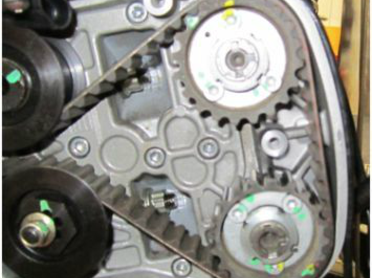 The yellow marks pictured on this horizontal cylinder are made on the pulleys where the valve cover gasket sets on the cylinder head. The three previous pictures  show the pulley alignment  at the “home” position . The markings will be necessary for reassembly when the belts have to be removed for shim (or belt) changing. Additional notes on setting the engine to “home” and/or TDC in general.  At TDC the arm on the turning tool will point towards the spark plug of the cylinder at TDC. The TDCs of the cylinders are 270 degrees apart. Once this “home” position has been established and the marks are made on the pulleys, turning the engine 270 degrees counterclockwise positions the vertical cylinder at TDC.  For ease of access and to build the foundation for taking valve clearance measurements, start with the vertical cylinder. Set the vertical cylinder to TDC. This is 270 degrees of rotation (counter clockwise) from the horizontal cylinder’s TDC. The opening cams will be “up” when at TDC (see picture). Use the recording work sheet while performing the measuring, determining, and replacing of shims.

The torque stripes (green marks) do not necessarily indicate alignment.

Look at the belt pulleys attached to the cams on the vertical and horizontal cylinders. The dimples (marks) on the pulleys will not align with anything useful. Use the paint pen to make some alignment marks you can refer to and always get the engine back to this “home” position. The yellow marks were made with a paint pen to indicate where the pulleys align with the gasket with the engine in the “home” position.

With the belt covers removed check alignment on the belts and pulleys. The intermediate shaft drives the cam belts. There is a mark (dimple)on the pulley and a mark on the engine case. At TDC of the horizontal cylinder, the marks will align. Use the paint pen to mark this alignment. Slight rotation of the engine forward/back may be necessary to locate TDC at this point.

A note about markings: Once the cam belt covers are removed, various marks on nuts, pulleys, etc. are evident. These are “torque” stripes. Once a Factory Technician torques a component down, it is marked. This makes it easier to keep track of what has/has not been torqued and a visual aid for the QA person to check if everything is tightened. 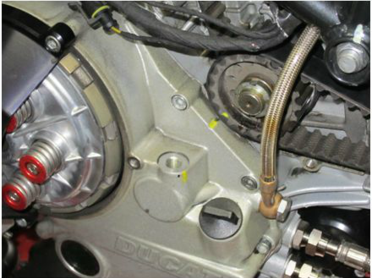 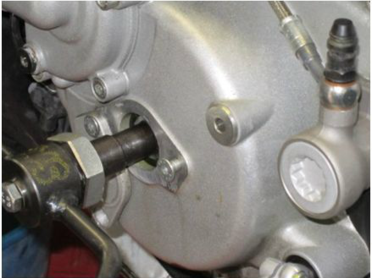 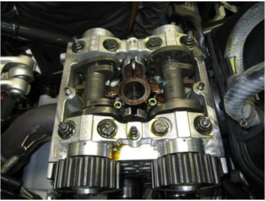 Once the belts are installed and tensioned, rotate the engine to verify everything lines up and check the tension again -  Adjust as necessary.

Use 19 ft lbs of torque on the belt tensioning nuts

Set the belt frequency at 110HZ for all 4 cam engines. Measure at points D and E to get an accurate frequency measurement. 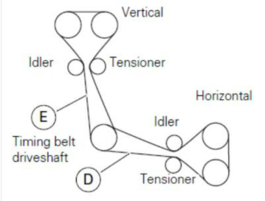 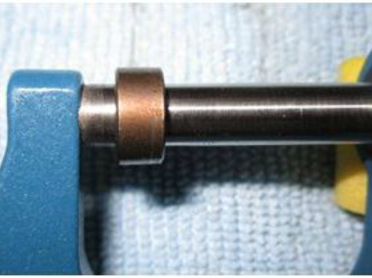 Close the micrometer. Do not over tighten. Press the “zero” button to set the reading to 0.00. Open the micrometer and place the shim on the stationary shaft of the micrometer, with the flat side towards the fixed portion of the micrometer. Measure the opening shim and record the measurement in column D of the worksheet. Determine the size of the replacement shim by adding column C to column D and record this number in column E. The number in column E is the ideal shim size to bring the valve clearance into specification. Shims are manufactured in .05mm increments and if the exact size needed isn’t in the shim kit, there is a solution:
Take the next larger size shim and make it the right size using 400 wet/dry sandpaper. Place the sandpaper on a flat surface (a piece of glass works nicely) and sand the shim into the desired measurement. Turn the shim every few strokes to provide even sanding. After some time sanding, re-measure the shim to see if it has been sanded into the correct size. If not, continue sanding. Once the shim is the correct size, reinstall it onto the valve stem or put it aside in a well marked spot if the closing shim on the same valve requires replacement.
CLOSING SHIM REPLACEMENT
The opening shims are flat on the top and recessed on the bottom so the shim fits on top of the valve stem securely.​ 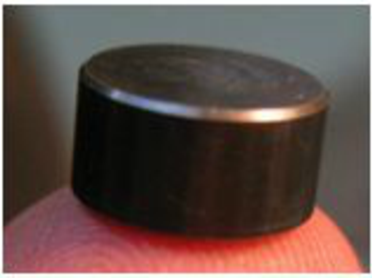 With the cam removed, the opening shim will lift off of the valve. Hold the opening rocker out of the way. Use a magnet or needle nose pliers to remove the opening shim.  If replacing more than one opening shim put it in a marked container (plastic bag, egg crate, etc.  so it doesn’t  get mixed up with other shims.
View on Mobile