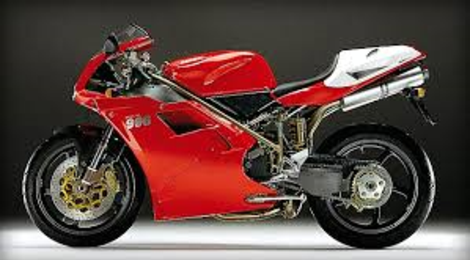 The valve shim measuring tool and the electronic caliper will be used to take the measurement. The tool sets inside of the closing shim and gives a standard 10mm addition to your measurement.

Turn the caliper on. Close the jaws using light pressure. Select the unit of measure: either inch or mm. Then shims are designated by Ducati in millimeters and using mm as the unit of measure simplifies new shim size selection. Press ZERO to set the base line for the caliper. Place the Shim Measuring Tool inside the closing shim (narrow end in) and measure the overall length.

REMEMBER- The TOOL adds 10mm to the measurement: subtract 10mm from the measurement and record your number as K (in the example pictured, 3.5 would be recorded in column K)

ADD column K to J to obtain L. The number in column L represents the new shim size required to bring the closing gap into specification. Buy or replace the existing shim with one closest to L. Note, it is not always possible to get the exact shim size, a larger shim can be made to the correct size using emery paper to adjust the size of the shim.

Once the valve is reassembled, re-check the clearances to verify the valve train is within specification. With the cam belts installed, rotate the engine to verify smooth operation. Reassemble as required. 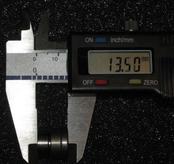 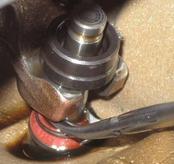 RECORD this measurement as D, the size of the existing shim.

ADD column C to D to obtain E. The number in column E represents the new shim size required to bring the opening gap into specification. Buy or replace the existing shim with one closest to E. Note, it is not always possible to get the exact shim size, a larger shim can be made to the correct size using emery paper to adjust the size of the shim.

Use the included clamps to clamp the valve stem to prevent it from falling into the cylinder while the closing shim is measured Use the magnet to extract both halves of the  retaining rings and set aside in a very safe place (a zip lock bag properly labeled with the valve the rings belong to). 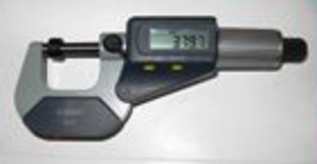 Remove the Opening shim from the valve stem. 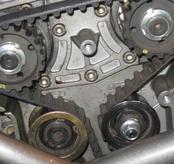 1. Remove the cover between the cam-wheels to expose the ends of the rocker shafts. 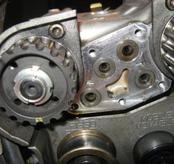 2. The ends of the rocker shafts will now be exposed. 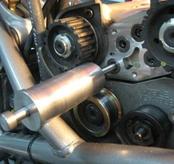 3. Thread the end of the “slap-hammer” into the end of the shaft. Slide the weight along the threaded shaft until it hits against the end. Repeat this procedure until the rocker pin moves and the rocker arm has enough clearance to move allowing access to the opening shim.

To get the accurate closing shim clearance measurement, the unloaded gap (A) must be subtracted from the loaded gap (F). Subtract and record the difference as H.

To figure out how much bigger the new shim should be, subtract (I) from (H) to get the difference and record the difference as (J). The value of (J) will be added to the measurement of the existing closing shim to obtain the size of the new shim required to bring the clearance into Specification.

Repeat this procedure for the remaining valves. It is easier to measure all the clearances before any dis-assembly: once a valve is disassembled, no more engine rotation can occur until it is reassembled 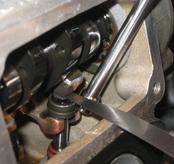 Once the engine is at TDC for the cylinder being measured, remove the valve cover. Be gentle with the gasket if you plan on reusing it. At TDC, the opening shim should be easy to spin with finger pressure. 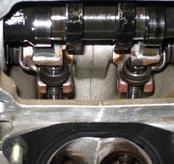 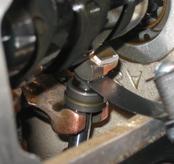 Use the included feeler gauge to measure the opening gap: the gap between the opening rocker arm and the opening shim. Begin measuring using a thin gauge, ~ .1mm; proceed using thicker/thinner gauges until the gap can be discerned. The correct feeling is one of slight resistance, similar to the feeling of inserting the gauge into a large book and moving it about between the pages.

Record the Ducati recommended clearance in column B.

Compare the two measurements. If A is greater than B (if the measured is greater than the recommended, subtract and record the result in column C: this measurement will be added to the existing shim measurement to obtain the new shim size (if required). If B > A the valve is within tolerance and nothing needs to be done.

Once the interferences are removed and the engine is aligned, the valve covers can be removed to reveal the internals to be measured.

Refer to the Valve Clearance Measurement and Adjustment Worksheet that came with the kit. The worksheet is designed to sequentially track the measurements required for adjusting the valves.

The valve clearances are measured when the respective cylinder is at Top Dead Center (TDC). That is the maxim end of the stroke of the piston.

Rotate the engine and set one (horizontal or vertical) cylinder at TDC.

Remove the cover plates to access the opening and closing rocker arms and the associated valves and shims. 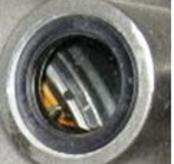 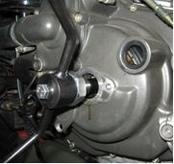 This procedure is good for all

This guide is supplemental to a good shop manual: LT Snyder’s Desmoquattro Maintenance Guide is an excellent resource and is recommended. Use the accompanying worksheet to track existing measurements and determine replacement shim sizes.

Desmodromico (Desmo) engines use a positive valve control system to open and close the valves at the same time in the combustion cycle regardless of RPM. Ducati has made several variations on the 4 valve engine since its introduction.   This process can be time consuming. For ease of mind it can be broken down into  manageable steps: